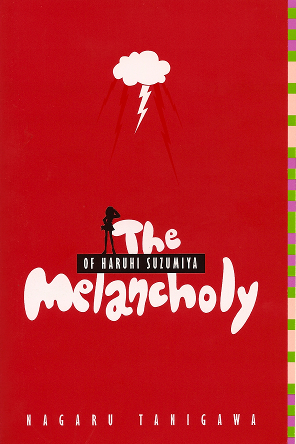 After about a week of reading in study hall and at home, I finally finished my first novel in what would seem like ages. After 200 pages of the book and a short manga preview, I’m ready to tackle the phenomenon known as Haruhi. I had picked up the soft cover version through Right Stuf about a month ago, which actually features a different cover art than the hard cover (the soft cover is pictured to the left). I prefer the soft cover design, it was simple with a silhouette of Haruhi, the name of the novel, and a lightning cloud. It isn’t overly flashy or something that would draw unwanted attention while reading. The quality of the book was fine. I had no problems with the paper or reading the text. It felt fine in my hands to read and because it is a soft cover, it was easy to hold while reading in a comfortable fashion. For a little info on the series, the ever so popular anime is based on the light novels. Currently in Japan there are 9 published so far with a 10th on the way. In the U.S.A. Little, Brown is bringing the 2nd novel over in October (it may be available in bookstores now, and I’ll have to pick it up a.s.a.p.), and I would have to imagine the 3rd, 4th, and so on eventually.

Time to get to the nitty-gritty of the novel, the actual contents, being plot, setting, characters, and writing. The story is told first person via the male lead, Kyon. The novel goes through his experiences as a first year in high school. In his class happens to be the beauty but extremely odd and bossy Haruhi Suzumiya. All she cares about are super natural occurences, not making friends or joining any average clubs. One day Kyon decided to talk to Haruhi. He tells her she should start her own club. Well it just so happens that Haruhi does, and she names it the SOS Brigade. The club’s room is the previous Literary Club’s room, however, there is only one member, the stoic Yuki Nagato. Haruhi assumes that since Yuki is always in the club room that she is part of the club. All that’s left is the club’s mascot. Haruhi picks out the shy, soft-spoken Mikuru Asahina to join the club. She forced her to join and wear ridiculous but sexy costumes, like a nurse outfit, bunny girl costume, or maid outfit. So far you may be wondering what the point of the club is, and I don’t think most of the members them selves know. Haruhi claims it is to find mysterious happenings, anything involving aliens, time travelers, or espers. Haruhi is hoping for a mysterious transfer student to show up, and what do you know he does. His name is Koizumi and very shortly he joins the SOS Brigade. One by one it is revealed to Kyon that each of them is either a time traveler, alien, or esper. They are all researching or watching the mysterious Haruhi Suzumiya, who they believe is a god and has the power to control the universe.

The anime is definitely a faithful adaptation to the novel. While reading the novel I could picture in my head exactly how this happened in the anime. While it is good to stay close to the source material, it almost made reading the novel a little bit stale and boring. Even though it may have been a story and characters I was familiar with I just wanted to continue reading it. Towards then end when the plot begins to come together, things get really interesting. I really didn’t notice any major differences between the novel and anime, besides the novel didn’t include the island episode(s) that the anime featured. They really didn’t serve much purpose to the plot if I remember correctly. The novel really makes Haruhi seems like a snob, which I believe she is, but I’m surprised people put up with her the way she acts. Yuki is almost the same as she was in the anime, not saying many words, but still being awesome. I thought that Mikuru in the novel was very likable, but words do not properly convey the charm that the anime does. You can’t see exactly how she looks at certain moments, which are heart breakers because she is so cute. The writing in the novel wasn’t anything to advanced or hard to understand. They are some iffy sexual themes throughout the book, but nothing over the top. The translation seemed fine to me, with no garbled sentences that made no sense.

In the end, I enjoyed the novel, and I will definitely be picking up the next one. While it may not have been the same story that most fans are familiar with, it is still an engulfing read. I would say read it if you’re a fan of the show and haven’t already. If you haven’t seen the series, I don’t know if you will enjoy the novel nearly as much, but it is worth checking out.